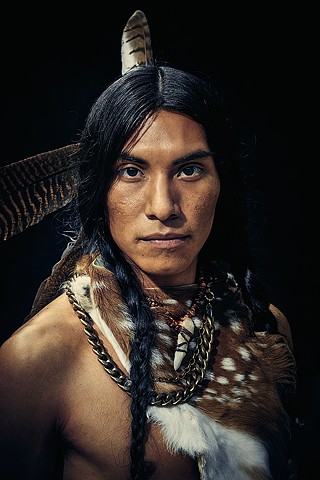 Kak-u'-nuî Goyahkla Onixohtlak, better known as Sparrowhawk, was born in a modern city built on top of a land once known as Iyáang (poison oak place), colonially known as Los Angeles, California. It was during a phase of a New Moon in the Spring and according to the civil calendar, March 26, 1990. Sparrowhawk comes from an intertribal heritage, his ancestors roamed the lands of what we now know as California, The Southwest, Sierra Madre Mountains and Northern Old Mexico. Although euro-centrism, the urban life and Christianity has influenced his family for at least two centuries, fragments of the spoken indigenous languages, stories, prayers, customs, and spirituality somehow made it to his awareness, and now he continues to nourish his knowledge and to embrace his Cultural Heritage.

Growing up, he always refused to cut his hair, and managed to keep it long for most of his life despite of having to cut it to fit a "system" or discipline, but he is proud that was the most notable Native custom he was able to maintain throughout his early days. He studied 7 languages and became fluent in most of them, but he's not very proud of such because neither of them were indigenous to this Hemisphere. Now as an adult, he is using his linguistic skills to learn into depth the languages spoken by his ancestors. Studying the mother tongues Uto-aztecan and Athabaskan has opened his mind into the various languages and dialects his ancestors spoke. And continuing to learn more mother tongues, he has found a way to honor, his intertribal ancestry: Nde(Apache),Wixarika,Otomi,Chumash and other Costanoan, Puebloan and Southwestern tribes/nations. In recent years, his spirit has called him to learn how to join movements and stand up for indigenous causes. That is what also called him into the performing arts. His first acting role was appearing as Crazy Horse, for a Fox News Docu-series, and a month after that, he worked on an HBO pilot based on the Salem Witch trial Drama where he played a Wewenoc Warrior, and that's what helped him join SAG-AFTRA. Sparrowhawk is learning more and more about the art of acting and comedy, he sees this art as another way to channel energies.

Getting into the mind and spirit of a character requires serious skills and he intends to become an expert at such. In hopes of audiences appreciating his arts and performances, this will motivate him in learning and teaching into depth and dimension the Arts, Languages, and Cultures of all indigenous people of The Western Hemisphere!